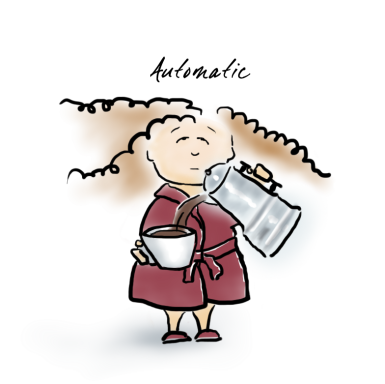 My day began like any other, except now that my boyfriend is staying with me in my tiny apartment for three months – I’m awakened by the sound of the refrigerator door opening, glass clicking and the burst of acidic air from a bottle of coke. Ah yes, just… peeking through one eye at the time… forty-five minutes before my alarm goes off – the joys of cohabitating. Don’t get me wrong, I love that he’s visiting me on the other side of the planet, but my morning side was never made of rainbow and sunshine. As far as I’m concerned, no human contact before 10 a.m. should be a well-enforced law – well, except for early morning sex. That’s great. No talking, no cuddling, just fucking, and then you roll over and go back to sleep.

Anyway, at this point I tried to salvage a little more sleep, although I already knew it was more wishful thinking than realistic. But before I could go back to the already forgotten land of dreams, I smelt the distinct odor of tobacco. Ok, I give up. Literally rolling from my bed I automatically reached for the remote to turn on the heat – morning rituals, plus cold, equals “fuck work I’m going back to bed.” And we definitely can’t have that (too often) now can we?

After some coffee, grilled cheese, getting my hair to look functionally decent, watching a few cartoons and having a smoke – I realized that almost two hours had passed and I was already (almost) late. So I grabbed a dress threw it on and ran out the door. Soon enough, after looking down, I discovered that my previously-unworn-dress was way shorter than I’d anticipated, barely reaching mid-thigh on my 5’10” legs and somehow even shorter in the back. Yup, this will definitely not work around teenagers.

While practically running the 10-minute walking distance to my destination and clutching my coat around me like a protective armor, I called my apartment phone which was picked up on the third ring with a cheery “moshi moshi.” I couldn’t help smiling at his noble attempt. “Could you bring me a pair of pants…?” I asked, dodging a co-worker’s eye contact and slipping stealthily into a nearby bathroom.