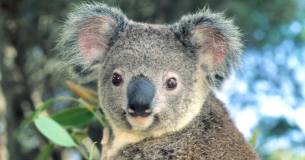 An adorable koala caused the cutest traffic jam on Brisbane Valley Highway in Australia while attempting to cross the street on Saturday.

Onlooker, Mike Phipps, joked about the incident on Facebook.

“Only in Australia!” Phipps added. “Made our day.”

While the tiny koala tried to make its way back to the bushes, unperturbed motorists stopped to make way for the furry marsupial. Some people even exited their cars to watch the lovable pedestrian make its way up and down the highway.

And as a patient patrolman attempted to direct the koala off the highway, several persons took out their phones and took videos and pictures of the hilariously adorable incident.

Spoiler alert: the too-cute critter finally made it to a tree!